Many people feel a strong connection to their birthstone. As a result, birthstone jewelry can feel very personal, adding a degree of specialness for the wearer. The May gemstone, Emerald, is especially appropriate considering the season. Its coloring feels right at home during this time of year, making it seem like an apt choice for the month.

If you have a May birthday or want to find a gift for a friend or family member born during the month, a piece of May birthstone jewelry could be an ideal option. Here’s a look at what the birthstone for May is, its characteristics, and other important details about the stone.

What Is the Birthstone for May?

Like many other months, May is associated with just a single gemstone. The one and only modern birthstone for May is the emerald, a variety of beryl that grows as a six-sided crystal. As it develops, emerald crystals can reach up to a foot in length. 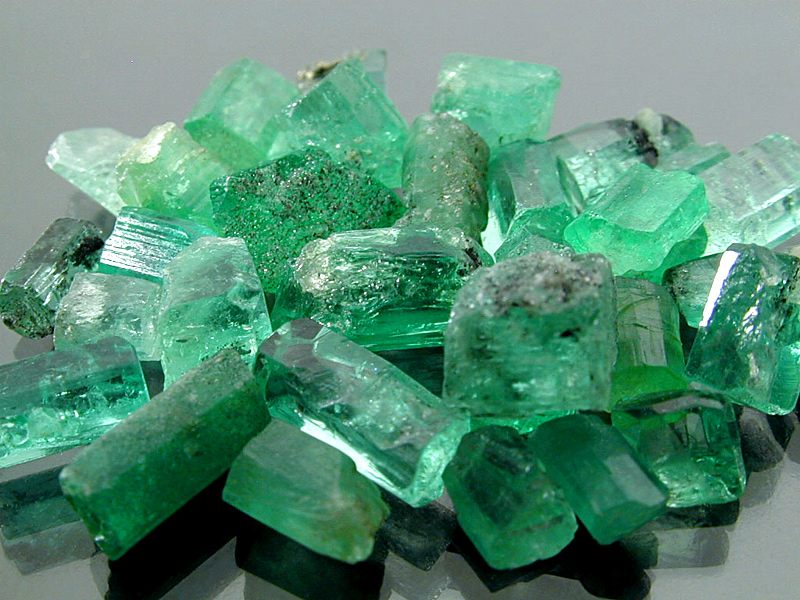 One trick with emerald is, unlike many other gems in the beryl family, it is highly prone to fracturing. Usually, it’s the trace elements that give the stone its color that actually lead to the cracks. Chromium and vanadium, both of which can alter beryl’s hue, replace the aluminum in a typical beryl mix, it impacts the stone’s lattice structure, resulting in more fracturing.

Emeralds can actually be found all around the globe. Some of the most noteworthy sources include Afghanistan, Brazil, Columbia, and Zambia. However, while the stones aren’t inherently rare overall, high-quality natural ones aren’t widely available. This makes them incredibly valuable since they are in short supply.

Otherwise, many of the moderate- to low-quality emerald gemstones undergo special treatments to improve their clarity. For example, they may be oiled to fill internal fractures or enhance the color. This process creates a better appearance initially but will eventually wear off.

Since they’ve essentially been altered, they aren’t as valuable as their purely natural counterparts. But even those stones can come with high price tags, depending on the resulting final look, cut, size, and setting.

When it comes to the meaning of emerald, some cultures think the stone symbolizes wit, foresight, and eloquence. It’s even associated with royalty due to these presumed traits. Others connect the stone to fertility or intuition. In certain traditions, it is considered a gemstone that offers protection from demons.

What Is the May Birthstone Color?

The birthstone color for May is green. In fact, the name “emerald” is derived from “smaragdus,” a Greek word that means “green gem.”

However, that doesn’t mean there aren’t technically multiple May birthstone colors. Emeralds aren’t all a single hue. Instead, they can vary, with some emeralds being notably lighter or darker than others. In most cases, the deeper the shade, the more valuable the stone. In fact, some of the rarest and most coveted versions feature a dramatic green-blue coloring.

It is important to note that some emerald treatments do alter the color, usually making the gem’s original hue darker or more vibrant. However, they tend to keep the stone in the green color family. May gemstone jewelry is widely available, partially because the stone is popular outside of its status as a birthstone. Many people enjoy the green hue and the emerald’s reputation for opulence, increasing the prevalence of emeralds on the market.

May birthstone bracelets, rings, and earrings are all quite common. When it comes to a May birthstone necklace, you’re more likely to find pendants. However, you could also find some tennis necklaces featuring emeralds if that’s your preferred style.

Generally speaking, emeralds are cut and faceted. In fact, there’s even a cut named for the stone, the “emerald cut.” However, you can also find them in princess, round, oval, cushion, pear, teardrop, and other common options.

It is important to note that emerald cabochons are available, too, but are relatively rare. As a result, they can be incredibly expensive when done well.

Due to the May stone color, you can find May birthstone jewelry featuring a variety of metals. Green can work with gold, pink, and silver tones, so you’ll discover emeralds in gold, white gold, rose gold, silver, and platinum settings

Stones Similar to May Gemstone

For many, the price of emeralds isn’t something they can shoulder. As a result, they may look for more affordable emerald alternatives. Luckily, there are quite a few stones that have a similar look but don’t necessarily come with the same high price tag.

Some pieces of green apatite can resemble emeralds, though it isn’t necessarily widely used in jewelry.

Green chrome tourmaline has an incredibly similar look, as well. However, it’s only generally found in smaller sizes, so you can’t always find stones larger than one carat.

You may also see green garnets in jewelry, though the price can vary depending on the precise variety.

Green chrome diopside may also mimic the look of emeralds and, even though it’s somewhat rare, can still be cheaper than the traditional May birthstone.

Certain green sapphires come in emerald-like colors, though they may also come in a shade closer to lime green, so it’s essential to examine the piece if you’re looking for a substitute May gemstone.

Peridot is naturally green, though it tends to lean toward the yellow or brown side of the spectrum. As a result, you may not find a stone with a deep or clean enough hue to stand in for an emerald.

The same goes for green tourmaline, which can have a somewhat muddied coloring, depending on the stone. However, that doesn’t mean they aren’t worth considering, especially since every piece is unique and may meet your needs.

For May Birthstone alternatives to emerald, be sure to check out my article listing all of the traditional and modern birthstones, as well as tropical and Chinese zodiac birthstones.